These partnerships focus on shared goals around 1) awareness and education, with a special focus on youth, 2) monitoring athletes and information sharing, and 3) testing programmes and services. 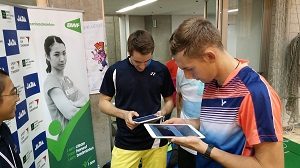 One good example of this is the partnership BWF has with JADA – Japan Anti-Doping Agency. This collaboration started at the BWF World Junior Championships in Chiba in 2012 and more recently has focused on shared anti-doping testing activities and awareness programmes.

JADA and BWF both have awareness programmes that focus on the integrity of sport with the themes of “true and clean sport”.

PLAY TRUE 2020 is one of the three pillars of Sport for Tomorrow, the Japanese Government legacy project for the Tokyo 2020 Olympic & Paralympic Games. 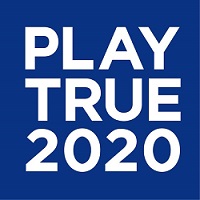 Its vision is to create the future through the power of sport by disseminating messages on the values of sport and implementing activities for youth. 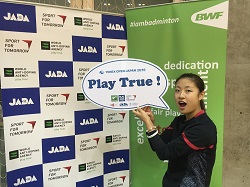 Former Japan international and current BWF Athletes’ Commission member Shintaro Ikeda assisted JADA staff at the booth in the badminton training hall, explaining concepts to players and inviting them to participate in the anti-doping quizzes and signing a ‘Play True’ flag re-committing the athletes to the true values of sport.

BWF and JADA will work together on shared activities in the next four years leading up to Tokyo 2020 Olympic and badminton’s debut at the next Paralympic Games.