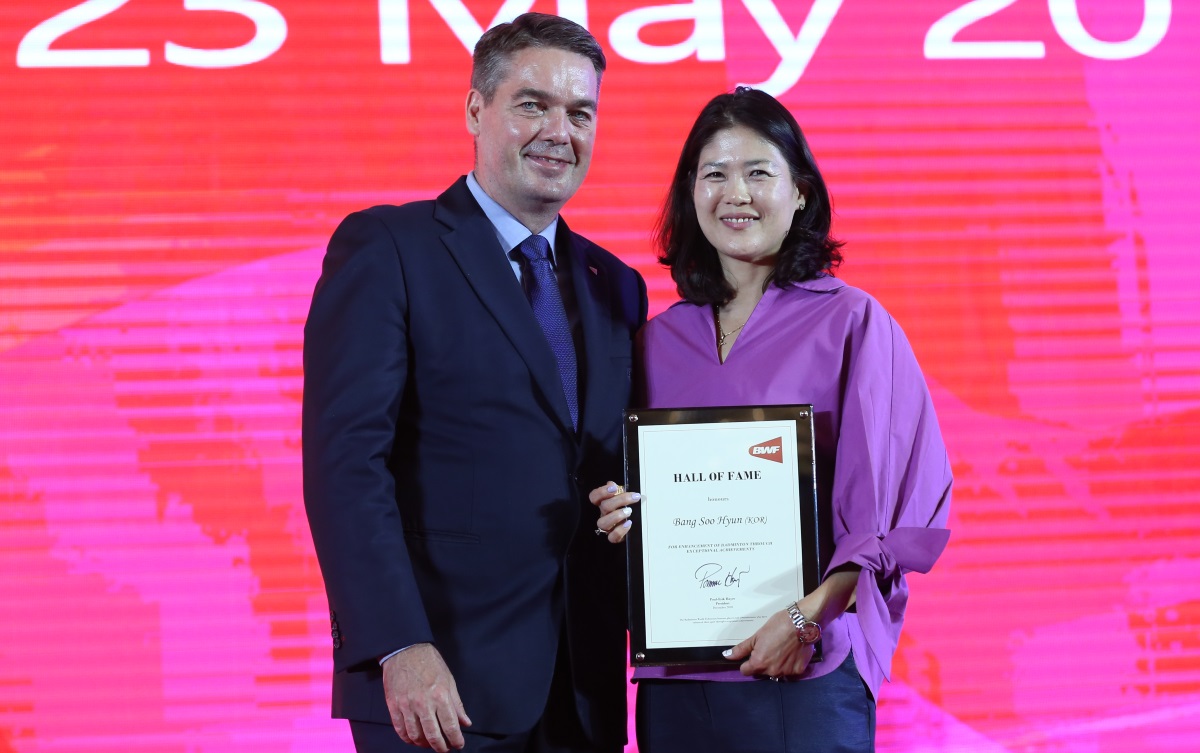 Bang Soo Hyun was one of the leading women’s singles players of the 1990s. The high point of her career was the women’s singles gold medal at the Atlanta Olympics 1996 after winning silver four years earlier in Barcelona. She won a number of other individual tournament titles, besides guiding Korea to two Sudirman Cup championships.

In the year following her Olympic gold medal-winning feat, she retired from competition but continued to be actively involved in badminton by coaching school children and the Pan Am junior team.

Since 2000, she has been engaged with Korean broadcaster MPC TV as Badminton Programme Commentator. She has received several awards from the Korean government, including the Korean President’s Award in 1998.

Bang Soo Hyun served as a BWF Council Member from 2005 to 2009. Bang joins eight of her compatriots in BWF’s Hall of Fame. Interestingly, she received the award from BWF President Poul-Erik Høyer, who was the men’s singles gold medallist at the 1996 Olympics.

Ronny de Vos started umpiring for Belgium and Badminton Europe 20 years ago and has served BWF at the highest level. He has officiated at the Olympics, the World Championships, and the Thomas & Uber Cup.

Ranjit de Silva’s service to badminton, with Sri Lanka and Zambia, spans 50 years. He spent 18 years guiding badminton development in Zambia, and went on to work with the BWF Council for a total period of ten years. His biggest contribution was to the Constitution & Ethics Working Group.

Jean-Guy Poitras had a career of more than four decades as an international Technical Official, working for Pan Am and BWF. His career in the chair spanned the very first match in the first Pan Am Championships in 1977, through three Commonwealth Games, and medal matches at the Sydney Olympics 2000.

He later served as BWF Umpire Assessor from 2003 to 2016 and chaired the BWF Umpire Assessors Panel from 2004 to 2016. He contributed a great deal to the current high standard of BWF umpires and the education system now in place for umpires.